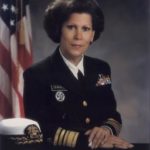 Antonia Novello is a Puerto Rican physician and public health administrator. She was a vice admiral in the Public Health Service Commissioned Corps and served as 14th Surgeon General of the United States from 1990 to 1993. Novello was the first woman, first person of color, and first Hispanic to serve as Surgeon General. Novello also served as Commissioner of Health for the State of New York from 1999 to 2006.