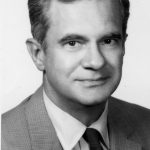 Ted Taylor was an American theoretical physicist, specifically concerning nuclear energy. His higher education includes a PhD from Cornell University in theoretical physics. Although Taylor is relatively unknown to the public, his most noteworthy contributions to the field of nuclear weaponry were his small bomb developments at the Los Alamos Laboratory in New Mexico. He is credited with numerous landmarks in fission nuclear weaponry development, including having developed the smallest, most powerful, and most efficient fission weapons ever tested by the US. Though Taylor was not considered a brilliant physicist from a calculative viewpoint, his vision and creativity allowed him to thrive in the field. The later part of Taylor’s career was focused on nuclear energy instead of weaponry, and included his work on Project Orion, nuclear reactor developments, and anti-nuclear proliferation.