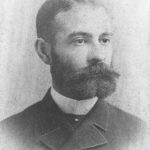 The heart surgery at Provident, which his patient survived for the next twenty years, is referred to as “the first successful heart surgery” by Encyclopedia Britannica. In 1913, Williams was elected as the only African-American charter member of the American College of Surgeons.