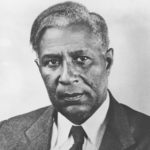 Garrett Morgan was an African-American inventor, businessman, and community leader. His most notable inventions were a three position traffic signal and a smoke hood (the first modern gas mask) notably used in a 1916 tunnel construction disaster rescue. Morgan also discovered and developed a chemical hair-processing and straightening solution. He created a successful company based on his hair product inventions along with a complete line of hair-care products, and became involved in the civic and political advancement of African-Americans, especially in and around Cleveland, Ohio.