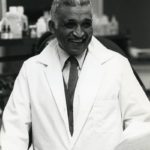 Samuel P. Massie was a chemist who studied a variety of chemicals that contributed towards the development of therapeutic drugs, including the chemistry of phenothiazine, and he worked uranium isotopes for the Manhattan Project to develop atomic bombs in World War II. He was elected as the third President of North Carolina College at Durham in 1963, and he was the first African-American professor at the U.S. Naval Academy. Massie was named one of the top 75 distinguished contributors to chemistry in history by Chemical and Engineering News. He was a leading educator who promoted the participation of African-Americans in education. University chairs have been endowed and named in his honor, as well as an elementary school.