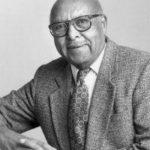 Walter Lincoln Hawkins was an American chemist and engineer widely regarded as a pioneer of polymer chemistry. For thirty-four years he worked at Bell Laboratories, where he was instrumental in designing a long-lasting plastic to sheath telephone cables, enabling the introduction of telephone services to thousands of Americans, especially those in rural communities. In addition to his pioneering research, Hawkins is also known for his advocacy efforts for minority students. He also served as the chairman of Montclair State University in 1973. Amongst his many awards, Hawkins was the first African-American to be elected to the National Academy of Engineering (1975), and, shortly before his death in 1992, he was awarded the National Medal of Technology by then-U.S. president, George H. W. Bush.