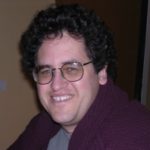 John C. Baez is an American mathematical physicist and a professor of mathematics at the University of California, Riverside (UCR) in Riverside, California. He has worked on spin foams in loop quantum gravity, applications of higher categories to physics, and applied category theory.